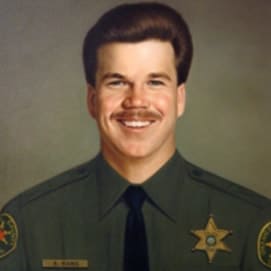 Bradley Riches was born in Canada. Because of his father’s occupation, his family lived in various countries including Holland, Singapore and Australia, before settling in Orange County. He graduated from Dana Hills High School in 1984.

He then worked for the fire department as a paid call fireman until 1988. During this time, he also worked as a medical technician for an ambulance company.

Riches’ career in law enforcement began in 1989 as an Orange County Sheriff’s special officer, a position ranking below deputy. A year later, he was awarded a Medal of Courage after wrestling a gun away from a distraught welfare recipient at a county office.

On Saturday, June 12, 1999, Deputy Brad Riches was brutally murdered. At 12:52 a.m., Riches was on routine patrol, driving through the parking lot of a 7-Eleven store in Lake Forest.

Without warning or provocation, a man carrying an AK-47 assault rifle opened fire on Riches while he sat in his patrol car.

Riches valiantly began an emergency radio transmission, but succumbed to the more than two-dozen assault rifle rounds that were fired at him.

During the news conference, Orange County Sheriff Mike Carona called the attack “sudden and unprovoked,” and “as brutal as you can possibly imagine.”

Five hours after the shooting, deputies and investigators arrested 39-year-old Maurice Gerald Steskal, a Lake Forest man who allegedly walked into the mini-market with an assault rifle and told the clerk that his intention was not to rob the store, but to use the weapon against police.

Steskal was identified as a suspect soon after the crime scene was secured, Sheriff Carona reported. Orange County Deputy Andre Spencer, one of several area deputies brought in to view the store’s videotape, recognized Steskal as someone he’d arrested. He identified him as “aggressive, assaultive and non-compliant with law enforcement.”

Sheriff Carona, his voice cracking with emotion, told reporters, “One of my deputies, one of my family is laying on the table dead. We are vulnerable, but we won’t roll over on our backs and let the criminals take over the community.” He described Riches as a “teddy bear of a man.”

Pastor Glen Kruen, who officiated at Riches’ funeral at the Saddleback Valley Community Church on June 16, 1999, stated, “He never stopped putting out that 110 percent effort that he learned to give as a child.

“Brad liked people. He made friends with anyone and everyone that he met. Brad made himself at home wherever he was. Brad’s nine years of selfless service to Orange County, and most recently to the city of Lake Forest, culminated last Saturday when he gave the supreme sacrifice.”

Riches’ older brother, Robert, said during the service, “Apart from being big in stature, he was big in heart. If ever there was a 6-foot-5 angel, Brad was it. A kinder, gentler brother there never was.”

He went on to say, “He was always thoughtful, always encouraging, always giving. Simply put, Brad was the best brother I or anyone else could have.”

Riches’ ex-wife, Patricia, said, “Brad Riches was the kind of guy to give you the last dime in his pocket, the shirt off his back. I want the community to know what an incredible person he was, what a loss this is to the community.”

A tearful Steven Conners, 13, recalled an interview he did with Riches for a school assignment on careers: “He just said you have to be willing to do the job and risk your life every day. He was really nice.”

Interment services for Riches were held at the El Toro Memorial Park in Lake Forest.

Riches, 34, was the first Orange County deputy sheriff since 1958 to be fatally shot while on patrol.

He is survived by his parents, Bruce and Meriel Riches, and brother Robert.

“They Are Not Dead Who Live in the Lives They Leave Behind,” he wrote meticulously placing the gold letters one by one. Now, a place will be made for him.