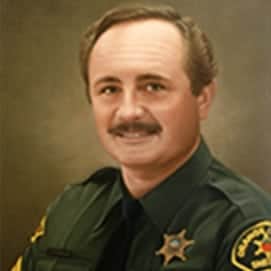 Ira Gabor Essoe, Jr. was born in Hungary on November 7, 1940. He moved with his family to the United States when he was eight years old. He attended the University of California Los Angeles and obtained both a Bachelor of Science and Master’s Degree in Management.

Following a very successful career in systems analysis and programming, Ira joined the Orange County Sheriff’s Department in 1972. His first assignment was working in the Men’s Jail. Two years later, he was promoted to the rank of Deputy II and transferred to patrol.

During his career with the Sheriff’s Department, he worked in nearly every division. His expertise in the field of computers and analysis was used throughout his career. He received commendations from then-Governor Ronald Reagan and Sheriff James Musick for saving the life of a swimmer while off duty.

In 1978, Ira was promoted to the rank of Investigator. He was assigned to Personnel and eventually the Warrant Detail.

On November 6, 1980, while working his shift in the Warrant Detail, Investigator Essoe and his partner drove to the Mall of Orange to collect bail on a warrant. As they looked for a place to park their unmarked vehicle, the investigators saw three men attempting to steal a car. The three men were all parolees. Investigator Essoe was fired upon as he attempted to make contact with the men. The shot paralyzed Ira from the chest down.

Following the shooting, Sheriff Brad Gates promoted Ira to the rank of Sergeant. Even after his life-threatening injuries, Sergeant Essoe continued to give back to the Department.

Essoe’s shooting prompted Sheriff Gates to establish what became “Project 999,” which helps wounded officers and the widows and orphans of peace officers killed in the line of duty.

Ira Essoe remained paralyzed and struggled to survive through hundreds of potentially life-threatening medical problems, all directly related to the shooting. On February 4, 2010, Retired Sergeant Ira G. Essoe, Jr. succumbed to his injuries. The coroner ruled his death a homicide labeling it “delayed complications from remote gunshot wounds.”

The shooters were sentenced to no more than 17 years in prison and were paroled after four years. Ira Essoe’s sentence was 29 years and three months. There was no parole.

Ira left behind a wife and three children.